The right way to allocate advertising budget: the case of a telecom operator

How well does outdoor advertising perform? What will be the effect of simultaneous launch of advertising on television and radio? What is the amount of investments to get the maximum return?

Let’s figure it out together with Alexandra Goncharova, Data Science expert from IBA Group.

One of the tasks of a marketer is to calculate how much money needs to be invested in each promotion channel: online advertising, radio, television, etc.

The budget is to be approved by the manager. The latter wants to get reasoned figures, and the marketer often lacks information why another amount would not give the desired results and what results to expect in general with more or less investment.  After all, the budget distribution is influenced by the characteristics of each channel and external factors, for example, holidays, events or the season of the year.

To substantiate a budget, you need a tool that is able to incorporate all the factors, assess their impact and demonstrate how to allocate the budget in the most profitable way.

Let us consider, using the case of a telecom operator, how to prepare a cost breakdown using marketing mix modeling and find the best investment channel depending on your targets.

Optimal budget calculator: the case of a telecom operator

The telecom operator’s marketers were tasked with achieving the maximum number of visits to physical stores. The budget is fixed, but it needed to be properly distributed across media channels.

The operator had the following available data for three years:

We needed to determine the budgets for media channels and the factors that affect the promotion channels. 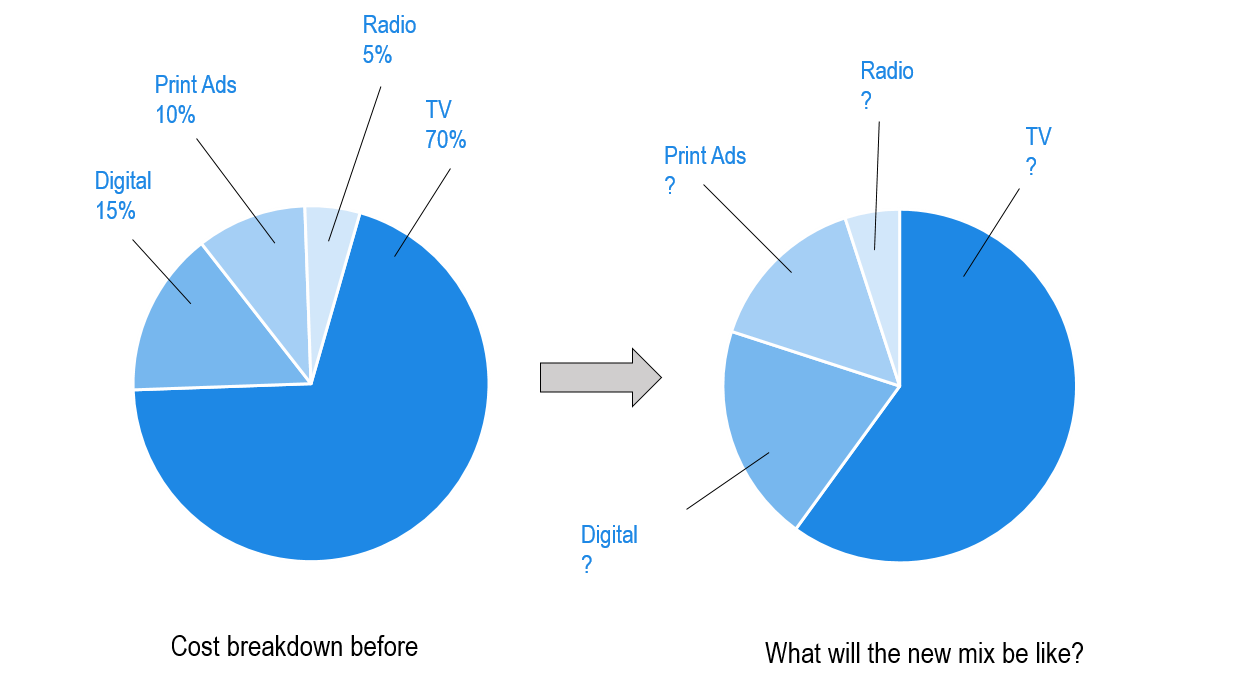 We assumed that each media channel has three key factors that influence store visits:

In addition, a fixed factor shall be considered: people go to stores without being exposed to advertising. This is influenced, first of all, by brand awareness, as well as seasonality, holidays, fashion trends.

When several media channels are involved at the same time, there is an overlap effect, which also needs to be taken into account when allocating the budget. 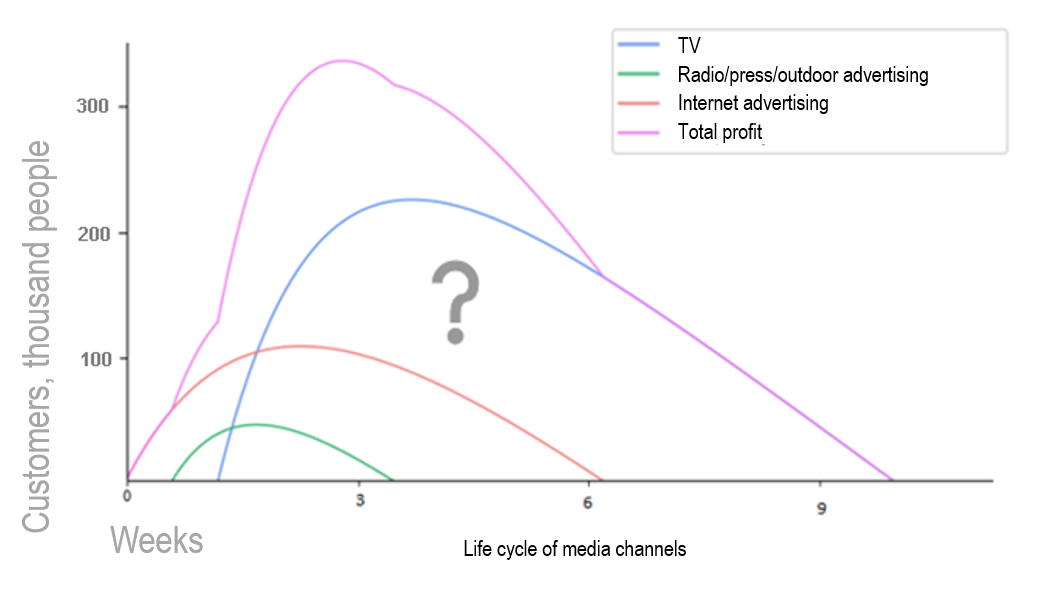 For the objectives of the telecom operator, we chose a model, the results of which are easy to interpret, and the model itself is easily integrated into the necessary tools and will work where there is little data.

The first challenge was the data itself: the information was insufficient; some data was presented in the form of colored sales promotion schedules in Excel. For the model, all data was structured and brought to a unified form. We also added exogenous variables, for example, the level of customer satisfaction, etc.

The second challenge was the model itself. It must incorporate a huge number of unknown variables, given a limited amount of data. We consulted with experts to make sure the parameters are correct.

The operator compared performance of the previous budget allocation and the new method and found that the customer acquisition cost had decreased three times.

To make it easier for marketers to allocate the budget, we developed a “calculator”: specialists set the amount and get the optimal breakdown. For example, if the budget is small, then it is better to invest in online advertising. And for large amounts, buy advertising on television, because people will go to stores due to the decay effect.

Now marketers are able to calculate ROAS (return on ad spend). They understand how much income each dollar invested brings. 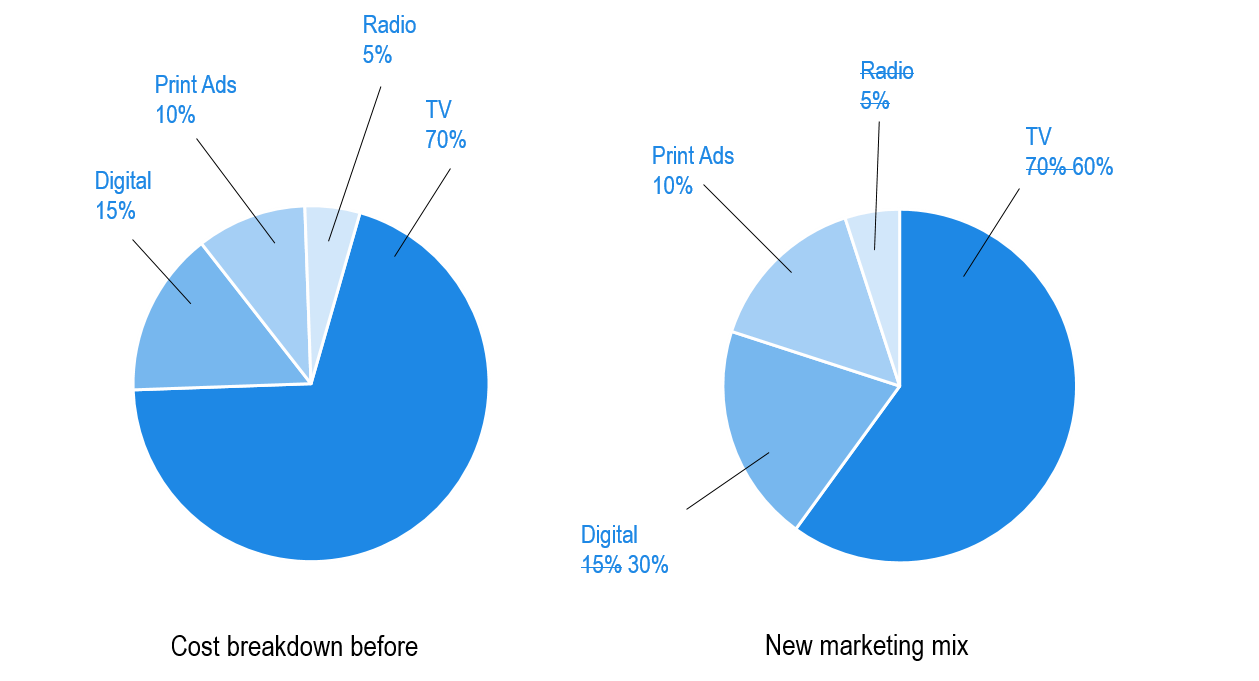 As a result of modeling, the following data were obtained:

Based on this data, we determined the performance of each media channel.

Online advertising performs well without lag and without decay.
TV advertising is efficient with a long decay period, but also with some initial lag.

Advertising on the radio, in the press, or outdoor advertising have minimum performance with little lag and decay.

As a result of the project, they were able to assess the proportion of customers they received through advertising on the Internet, and the proportion from TV advertising. We determined how many people came even without exposure to advertising, only due to brand awareness and general market demand.  We identified seasonal factors such as holidays and vacations. Thanks to information about competitors’ advertisements, we were able to assess how many customers were “drawn away” from our customer by the competitors.

Thanks to marketing mix modeling, the marketer learns the amount and area of investments

Marketing mix modeling is beneficial not only for telecom operators, but also for businesses in many other areas, for example, consumer goods and services, retail, pharmaceuticals, etc. The solution has long been used by many companies such as P&G, AT&T, Coca-Cola and Pepsi.

Marketing mix modeling will build a cost breakdown based on data on promotion budgets for past periods. This will allow understanding the effects of various factors on your customers: investments in the Internet promotion, TV, competitor activity, seasonality, and more. And the budget calculator will calculate the optimal distribution of investments by media channels.